I’ve suspected for some time now that a massive percentage of touchdown passes (or explosive gains) thrown in the Big 12 (or nationally) in 2016 came off the dig-post(go) route combination.

Teams like to set it up in different ways but that combo is ideal for attacking deep and it seemed that many teams were regularly landing big shots with it.

I’m also starting to suspect that a significant percentage of the interceptions thrown in 2016 were thrown to a weak side curl/flat defender that the QB lost track of. That’s typically either the weak side LB, like in this cover 3 set up: 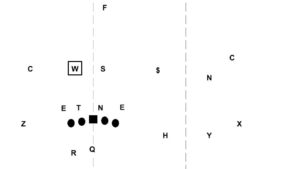 Or often the free safety dropped down as a robber in quarters: 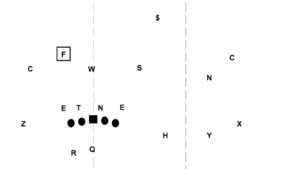 It could be a few different players but my suspicion is that this guy, who’s in charge of curl/flat or #2 to the boundary, is often free to roam a bit and often lurks into the passing window and picks off the QB.

But to what extent?

Would any of y’all be willing to help me to find the answers to these queries?