Over at Football Study Hall I talked about their return to the 4-3 Under defense which they showed in the spring.

As I noted there, the biggest key to a successful transition is the play of 3-technique Neville Gallimore. They don’t have a ton behind him since they’ve been recruiting 3-4 DEs for a few years now and missing on the best 3-technique recruits. I think they’ll get back to their normal standards in time but they need him to hold down the fort in the meantime.

The play for the nose and strong side end will be similar and possibly easier for the end in the new shaded technique while the nose might have a stiffer challenge. That nose needs to be good, but they have been recruiting and developing guys at that spot for a few years and should be in good shape. It’s the 3-technique that’ll be interesting.

The more I study how this set works the more I think Caleb Kelly will have a chance to make a lot of disruptive plays and force teams to throw the ball or work on the boundary. What I’ve outlined in this article is VERY similar to what Ohio State played against Oklahoma last year and obviously that wasn’t super easy to attack, although the Buckeyes had much better personnel on defense than the Sooners will have this coming season.

So on the list of things that the Sooners need to nail down this fall:

Because this is what you face if you want to be aggressive with your sam: 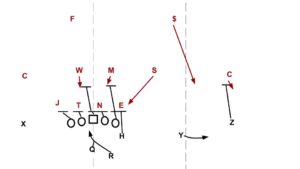 This is a tough way to play Big 12 defenses unless your sam can pause before attacking the ball and still arrive in time, OR your corner is dominant playing those perimeter blocks, OR your strong safety is a tackling machine. Ideally you want all three to be at least partially true and I’m not sure on either of the latter two points for the Sooners this coming season, especially if they have to move Parker over to free safety.