The old “Mack Brown wanted prospect X as a safety” meme is pretty much dead and gone now that Texas is on their second post-Mack coach, but the ultimate example of Mack’s QB eval problems just went no. 1 in the NFL draft.

Back in the day before that meme got going things were chugging along reasonably well. In 2005 Texas thought they were getting two QBs, Louisiana 5-star dual-threat Ryan Perriloux and then little known West Texas Colt McCoy. Then Perriloux flipped to LSU late, apparently leaving Texas in the lurch until it turned out that Colt McCoy was a quarterbacking genius.

That was resolved in the 2006 season when Colt won the job as a RS freshman over 4-star true freshman and early enrollee Jevan Snead (who then transferred to Ole Miss). Here’s how Mack’s QB recruiting went once Colt McCoy was established as “the man.” 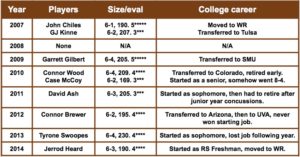 If you’re hazy on this history, allow me to fill in some gaps. They started by aiming for more dual-threat spread guys and Chiles was such an exciting athlete that many people believed he might take over for Colt after McCoy’s sophomore slump season in 2007. That went sideways when Chiles never mastered the QB position and Kinne transferred when he saw he was stuck behind both Chiles and Colt for the foreseeable future.

That didn’t manifest in time to resolve it with any takes in 2008 and Mack was all in on 2009 anyways where they were landing Lake Travis star Garrett Gilbert. Then Texas lost the title game to Alabama when Colt suffered a freak injury and Mack Brown, probably having spent the entire season fighting panic attacks in the training room while watching his war horse receive ice baths and treatments every day, lost his mind.

He decided to transition towards a downhill run game that Scipio Tex hilariously referred to as “the Jack and Jill offense” that Texas lacked either the OC, OL, TEs, or RBs to execute properly and Gilbert floundered as a result. Then Mack fired longtime offensive assistant Greg Davis and hired Bryan Harsin from Boise State to install a more physical offense.

Harsin arrived to find 2010 prospects Connor Wood and Case McCoy on the team with David Ash coming in as a freshman. McCoy was a savvy player who lacked the frame or fiery competitiveness of his older brother while Wood was a strong-armed prospect who never put it all together. Harsin quickly recognized Ash as the best talent on the team after Gilbert collapsed like a dying star and looked to supplement things with an Arizona kid he’d probably evaluated at Boise named Connor Brewer.

Ash started to put it together and Brewer transferred, hunting for a chance to start, but then Harsin left Texas out of disgust at Mack’s complacency-riddled and risk-averse culture that he felt didn’t actually allow for the formation of the kind of physical offense he was hired to install.

Mack ironically turned to Major Applewhite at that point, the original Texas QB controversy man, and Major started to transition the offense back towards the kind of balanced spread attack that had served Texas so well in the 2000’s. However in that process, David Ash incurred a bad concussion against BYU and then another a week later (probably before the first properly healed) against K-State and that was all she wrote for his career. He came back for one game the next year against UNT (under Charlie Strong) but got another concussion without even taking any real hits and then everyone knew it had to be over.

As a part of this transition and Mack’s frustration with the lack of progress from the “jack and jill” offense, Brown determined not to allow “the next Vince Young” to get away from him again. You can hear even now when Mack talks about being the head coach of Texas how much bitterness he carries over decisions he made that he feels the fans pushed on him with their criticism. Really you’re just bitter at yourself, Mack, for being pushed around by fear.

That led to the 2013 recruiting class which was rated no. 2 in the nation but proved to be a total disaster for Texas. Mack didn’t survive the 2013 season anyways…

Meanwhile Oklahoma was in their own transition phase…

Oklahoma’s big transition took place in the 2009 season when their attempt to get back to the national championship game was foiled because a rebuilt OL allowed BYU to knock Sam Bradford down on his shoulder (BYU again!) and then Texas knocked him out of the Red River Shootout when a nickel blitz by Aaron Williams drove him down on the same shoulder.

So the Landry Jones era began for Oklahoma and it was a reasonably decent one. Jones is a record holder at Oklahoma for executing the offense that Kevin Wilson built and left behind but the Sooners had some struggles getting their run game going after Wilson left (after 2010) for the Indiana head man’s job.

Much like Mack Brown down in Austin, Bob Stoops turned to his QB from the 2000 season that had helped him launch his program and later become an assistant, Josh Heupel.

Heupel struggled to get the run game going with Landry Jones at the helm and struggled even more to replace the record-holder. Here’s a glimpse of OU’s recruiting while Landry Jones was holding down the fort in Norman.

As a refresher, Blake Bell started out as a short-yardage specialist for Oklahoma in the “Bell-dozer” package which was a devastating complement to the Landry Jones passing game. After Jones left Bell struggled to develop as a complete QB and lost the job to Trevor Knight who had his own flaws but was an explosive runner.

After struggling to get going with dual-threats, Oklahoma tried to get back to securing tall, strong-armed pocket passers like Bradford or Jones while Heupel was reconfiguring the offense in 2014 around RPOs and downhill running with a big OL and backs like Samaje Perine.

Oklahoma was having problems though, now with their passing game, and then also with the defense which had been handed off from Brent Venables to Mike Stoops. With Baylor taking over the conference and the Sooners floundering, Bob had to make a move so he fired Heupel and brought in Lincoln Riley from ECU off the recommendations of Air Raid contacts he had.

Meanwhile, Oklahoma also reached out and got some extra help from a disgruntled walk-on at Texas Tech…

Heading into the 2011 season, Lake Travis was hoping to win their fifth consecutive state championship (playing at the 4A level at that time which was the second highest) and returning an athletic back-up QB named Colin Lagasse who was entering his senior year. As a back-up to Michael Brewer, Lagasse had thrown for 522 yards and run for 480 more along with nine touchdowns. He was a good overall athlete, ranked as a 3-star by 247, and would head to SMU to play his college ball.

Instead he lost his job to another athletic player, an unknown junior named Baker Mayfield who brought a stronger passing dimension and allowed Lagasse to move around as a hybrid. With that configuration, Mayfield threw for 3788 yards with 45 TDs while rushing for 754 more and another 10 TDs. Lagasse had 867 rushing and 445 receiving and the Cavs dominated in a 16-0 season that is still looked back upon as one of the more impressive HS teams of the century.

As a senior on a team that lost a chunk of the talent from 2011 and was now playing 5A ball, Mayfield had another solid year but Lake Travis went down in the first round of the playoffs. Then it was on to the world of recruiting, here’s how 247 had the Texas QBs of 2013 ranked: 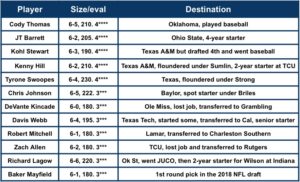 I’ve always given 247 credit for at least giving Mayfield 3-stars while every single Big 12 program passed on offering him a scholarship but…they obviously didn’t think that much of him either. Technically he was undersized, had perhaps a loud and aggressive demeanor and family, and while he’d won a state title he was the 3rd straight LT QB to do so and the first one in six years to fail to win one. Look at his film and you’ll see a guy with a pretty strong arm, quick feet, and good vision and accuracy distributing the ball but most evaluators were unimpressed and disinterested.

This is where the story gets wild.

Mayfield’s dad apparently reached out to Mack Brown and his staff at Texas telling them that Mayfield would be interested in walking on at Texas if they’d give him a preferred spot (meaning a guarantee of being on the roster) and Brown responded that they already had five QBs on campus they felt good about (soon to be much less). Evidently while Mack was determined not to miss on the next Vince Young again he had overlooked the possibility of missing out on the next Colt McCoy. Papa Mayfield then famously told Mack that none of the QBs at Texas would even start at Lake Travis and that was that for any chance of Mayfield ever playing at Texas.

He walked on at Texas Tech and had a solid freshman year that was impressive but slightly hard to evaluate given that fellow Cavalier Michael Brewer and fellow freshman Davis Webb also had success that year while throwing to Jace Amaro in Kliff Kingsbury’s offense. Evidently Mayfield felt like he had proven he was the best though and when his starting spot wasn’t guaranteed he left to go walk on at Oklahoma. The rest there is history…three years as the starter after a redshirt year, three Big 12 titles, two playoff appearances, three times a Heisman finalist, once a Heisman winner.

Baker Mayfield is the pivotal player of 2010s Big 12 football

Perhaps the most pivotal figure in Big 12 football history. It’s easy to argue that the fates of Mack Brown, Bob Stoops, Lincoln Riley, Major Applewhite, and a dozen other important figures were determined largely by their relationship to Baker Mayfield.

Nowadays Mayfield talks up how he loved OU as a high schooler and hates Texas but the fact remains that Texas could have had him with even a preferred walk-on offer, it just didn’t come. Oklahoma could have had him early as well, as could any of the other Big 12 schools that have struggled with QB play and been dominated by Mayfield over the last three years. They all passed, then they all got dunked on.

Without Mayfield taking over God only knows how the Lincoln Riley offensive transition goes at Oklahoma and it’s doubtful that it produces the kinds of results that lead to Stoops picking his time, place, and successor. Texas very well might have started Mayfield as a freshman in 2013 and then either Mack hangs on while Applewhite revitalizes the spread or his successor starts off with a legit QB rather than skill players who have to play the position by default. It’s also possible that 2013 proceeds the same but then the Charlie Strong era is successful or still going due to Mayfield taking over and bailing him out.

I thought Mayfield was an amazing college player and liked him the best of all the QBs in the draft. It looks like the Browns looked at him and determined that he probably shouldn’t be looked over by any football programs again.