I studied Iowa State’s 2017 run game pretty carefully this past week for a post over at Football Study Hall on whether it can propel them up yet another level in 2018.

Iowa State is a “smashmouth spread” in every sense of the word, using pass concepts that create vertical stress and running them off play-action with the threat of a run game that’s high on down angles and lead blocks at the point of attack. What is unique about them is how they do that from a mostly inside zone based approach. The big difference is that instead of using double teams they use pin and fold blocks.

It’s pretty difficult trying to determine how to feel about Iowa State as a Big 12 contender in 2018. You’re basically betting on their culture, evals, and unique style allowing them to field an effective run blocking OL out of very young players. Everything else seems to check out with 6th year senior Kyle Kempt manning the helm, Hakeem Butler and David Montgomery back, and the defense returning enough pieces to make their defense look pretty threatening. 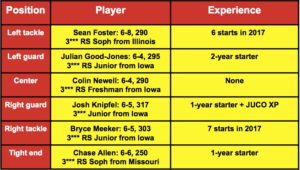 There’s also the chance that another RS Frosh pushes out Sean Foster but for now it appears that this will be the group. That’s not as veteran a collection of players as the 2017 Iowa St secondary that thrived in their new dime package but they aren’t all spring chickens either.

The fact that they’re blocking for David Montgomery with Campbell scheming constraints that include a 6th year QB and some potent skill players means they have a fairly large margin for error. The uniqueness of their scheme helps as well. I think this squad is a much stronger dark horse candidate than some of the other teams that have been named as potential contenders in 2018.