I can’t really blame Lincoln Riley for what happened in that exchange on the radio with Danny Kannell where the young Sooner coach gave the SEC some bulletin board material (however mild) by embracing the opportunity to compare playing defense in the Big 12 and doing so in the SEC.

You can read the full exchange and a good Georgia blogger’s response to the episode here with a nod to Allen Kenney’s response as well.

Here were the main problems for Riley in this exchange:

They didn’t really do so because of offense, although his play-calling down the stretch got a little too clever when Mayfield had already proven he could beat the Dawgs throwing to young Ceedee Lamb against man coverage. When push came to shove, Riley felt most comfortable trying to outsmart Georgia and that was an interesting note to tuck away for the future.

Anyways, his offense still lit up the Georgia D and any response by Bulldogs about their glorious third quarter shutting down the Sooner offense needs a rest. Nevertheless, any “yeah, but…” argument when you have the smaller number on the scoreboard just doesn’t look great.

Like, really bad. I know I talk about this a lot but it’s a huge deal because their D is the difference between OU being the strongest B12 team and being a national contender.

So when Lincoln Riley tries to speak on behalf of defenses in the Big 12 and uses the Georgia game as an example the obvious responses are: “Bruh, you lost that game…and your defense sucked.” The Oklahoma defense wouldn’t be good if they played in the SEC, obviously, because they played the Bulldogs even worse than the SEC East did despite having a month to prepare.

But it’s totally understandable why Lincoln Riley would throw that response out there. For starters, it’s totally true if we’re talking in terms of total defense. Georgia would not have finished as a top five defense in yardage allowed if they had to face a Big 12 schedule, just go watch them against Missouri and it’s obvious enough that they were as vulnerable as anyone else to a team that could throw the ball down the field against man coverage. There’s a lot of teams like that in the Big 12.

Missouri looked like world beaters last year down the stretch using the Baylor-style offense against the SEC East until they played Texas in the bowl game and got a taste of cutting edge anti-spread D. They gagged.

Btw, don’t think I didn’t notice that when Riley reached for defenses to list as examples of the better defenses in the Big 12 that he neglected to mention the Longhorns.

It’s also not entirely Riley’s fault that Oklahoma’s defense sucked last year. It’s definitely partially his fault and I have serious doubts about whether he knows how to run a program that will produce consistently great, tough defenses. However, he inherited a unit during the summer that was run by a nepotistic hire and had been crashed to the ground amidst a lack of accountability and DB development. As Allen Kenny argued in our debate on the problems with the OU debate, and rightfully so, the plausible solutions for the 2017 defense were limited.

The biggest problems with Riley’s statement are these:

His solutions for the OU defense haven’t really looked on point at all.

They’re amazingly keeping Mike Stoops around and bolstering him by hiring 3-4 guru Bob Diaco to be a consultant on how to continue to suck in that scheme. He rescued his old pal Ruffin McNeil from the wreckage of ECU and then put him on DL where the Sooners already had a coach and now the Sooner defensive staff is composed of four coaches for the front six/seven and one for the secondary.

There’s a sort of resignation in it.

You’d want a coach that really wants to emphasize physical defense to be looking for offseason opportunities to talk up how they were going to be better on defense rather than looking for opportunities to excuse bad performances. I get the definite sense that Riley’s formula in the Big 12 is to play “good enough” defense to allow the offense to carry the team’s water.

But because playing great D in the Big 12 is as hard as he’s suggesting, I don’t think it’s possible to play good defense without making it a major focal point to the program. It seems instead like Riley’s delegating that to his defensive staff…under the headship of Mike Stoops, and that ain’t never gonna work out.

He is leading the way for the team’s recruiting but, as our hierarchy for great defense shows… 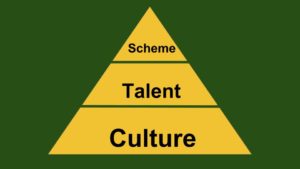 …talent infusion can only go so far in building a great defense. Especially if the talent isn’t being developed or deployed particularly well.

All in all, it seems that Lincoln Riley doesn’t know how to defend with comments either, only how to attack. If Lane Kiffin comes into Norman in week one and blows the doors off the Sooners than this offseason comment is going to age like Natty Light poured out over SAE’s unkempt lawn in Norman.