Back in the day when Wildcat MLB Arthur Brown headed out I had some serious doubts about their ability to replace him. Those doubts proved to be largely misplaced.

Second Snyder era K-State was the first team in the Big 12 to say “we’re gonna play quarters, we don’t care if you know it, go ahead and try to score on us.” When they won the league with a good defense in 2012 playing that way, it started to become a lot more popular. Of course Michigan State’s success doing something similar didn’t hurt.

That style has really helped define Snyder-ball, because it reduces things down to a game of execution that the Wildcats are always willing to bet they’ll win with their superior discipline.

The challenge of winning that way is always having 11 guys that can consistently execute their position ready to go plus depth to handle the inevitable injuries. That makes losing a guy like Arthur Brown tough, losing his ancestor Elijah Lee to the draft before his eligibility was up is a truly deep wound to the Wildcat roster.

The position that Brown and Lee played in the K-State D was more or less the same, although they labelled Brown the “mike” and have labelled Lee as “the will.” That position was “sam” or “outside” backer. In the 4-2-5 defense that K-State plays the two inside-backer positions are more or less the same but they would align Brown or Lee in whichever spot was more likely to have to cover a lot of space. So strong side inside-backer would be a good name, we’ll just stick with “outside-backer.”

Perhaps the toughest job this position draws comes against the 3×1 sets that Big 12 offenses love to throw at everyone: 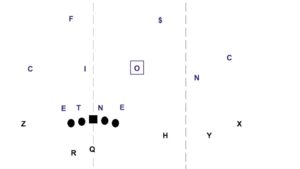 The “outside-backer” has to be able to match that third receiver on quick routes but also fit the run up front in the B-gap between the nose and the end. Sometimes they stunt that DE inside to the B-gap to help him out but he still needed to be able to cover a lot of ground.

Many B12 teams are pretty relentless about attacking this look from K-State, Baylor would love to run gap schemes to the weak side with a bubble to the strong side and make the outside-backer cover a ton of grass. 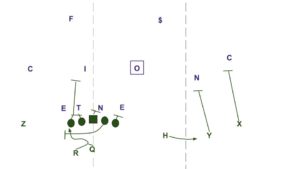 I think there was a lot of mutual respect between the Briles staff and the K-State bunch for how much trouble they could give each other but stuff like this made life very hard for Snyder’s kids. Baylor often got free yardage between the 20’s with this kind of scheme, even when playing guys like Brown or Lee.

Everyone else in the league tried to attack them in a similar fashion and why not? You can normally be pretty sure of what K-State was running so you might as well target the weak spots. That’s what this position is up against, frequently being targeted while tasked with helping the D to bend without breaking.

The Wildcats have had an impressive run at this position in the second Snyder era, particularly when Arthur Brown was able to take the field after sitting out in 2010 when he transferred to Manhattan from Miami. 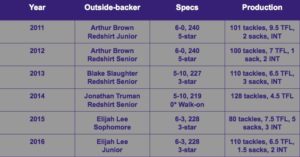 Then Blake Slaughter stepped in as a sort of stopgap. The coaches asked him to redshirt in 2012 realizing that they were going to need help replacing Brown and Slaughter had two years to play one and the perfect name for the position. He was actually quite good and caused even more disruption than Brown had the year before. He was flanked by former walk-on and weight room hero Jonathan Truman, who replaced him as the main LB for the Wildcats in 2014.

Truman was much less disruptive than Brown or Slaughter but he covered ground like a champ and made a ton of tackles despite regularly playing in a lot of space. Truman was accompanied in the backfield mostly by Will Davis, a Southlake Carrol kid who was big on the fundamentals but not athletic enough to handle the same kind of spacing that they ask of their outside-backers.

Thus it was that Elijah Lee, the most athletic player yet in this tradition of second Snyder era LBs, stepped into the role while Davis stayed inside. You’ll notice that the other guys all got redshirts and multiple years of development before being asked to cover all that ground in the middle and anchoring the Wildcat’s “bend don’t break” defense. Not Lee, and he made plenty of mistakes while learning the ropes in 2015. However, he also made a bunch of plays and he got a lot better and was a fairly dominant player in 2016…hence his decision to depart to the NFL where linebackers who can rush the passer and play with range in coverage are treasured.

The 2017 Wildcats now have to replace their best DL (Jordan Willis), best LB (Lee), and most veteran if not best DB in Dante Barnett. Could be tough.

Who’s next for the Wildcats?

I know the Kansas State roster pretty darn well but perhaps not well enough to be totally confident of how they’ll address this issue. Obviously the chart above has to lend some confidence to EMAW folk that Snyder will find solutions, but again this is arguably the hardest position to fill on their defense save perhaps for strong safety.

Here are the main options that I’m aware of:

Currently the Wildcats don’t even have a JUCO LB committed. Perhaps they go grab one, particularly with this loss, but the nature of their defense makes it hard to quickly plug in JUCOs because soundness is of the essence.

Tanking is another 0-star, former walk-on who’s been slowly working his way up their depth chart over the last few years. He caught my eye in the 2014 spring game with his really solid play and was good in spot duty last year and this year, even picking off a pass and breaking up two more. I’m betting that he finally earns a starting job in 2017…but at 6-2, 224 he’s more of an inside guy then someone that you want to ask to cover a lot of ground. A good solution for the “how do we replace Mike Moore?” question but notsomuch for the “how do we replace Lee?” issue.

You could try to overcome this by playing more cover 3, but that would require a very good cover safety and I’m guessing that K-State will actually be rolling with a Kendall Adams/Sean Newlan combo that would be better suited to playing more quarters.

Kirby is a 0-star, JUCO transfer from the past who has yet to really play much for Kansas State. He played OLB in a 3-4 defense at his JUCO and was really nasty as an Eric Striker-esque space-backer that could come off the edge. He’s 6-2, 220 and has been a special teams guy up to this point.

He has the quickness to handle this role and is more of a fit than Tanking, but I haven’t seen him play an inside-backer position and if you don’t know what you’re doing here and take false steps the amount of space you often find yourself in (see above) will kill you dead, quick. So Kirby may be a good answer to this problem, but he’ll have needed to learn a whole new position and learn it well to earn the job.

I had Rudzik as a future FB when I examined his tape last year. I’ve been haunted though by his 11.0 100m track time. That’s really freaking fast for a LB and even if he didn’t show a ton of change of direction on film that doesn’t mean it’s not there. A kid with that kind of speed could be a great candidate to step into this role.

But he hasn’t played at all yet, so he’s surely not at the top of the list.

Sullivan was a 3-star recruit and likely the long-term plan for the position back when he was signed. He played a similar position in high school, redshirted as a freshman, and got on the field just a little bit this year as a redshirt freshman.

He’s a great athlete but the questions about him are the same as those for Kirby, is he ready to play mistake-free football in a demanding role for a team gunning for a Big 12 title?

I’m hoping they broadcast the spring game this year because this might now be the biggest question for the 2017 Kansas State Wildcats.