Over at Inside Texas I was describing the great riches of experience and talent in the Longhorn secondary returning next season ($) and included some research I did on B12 secondaries over the last five years.

What I found was that the defenses that have ranked in the top 40 per S&P+ in the Big 12 over the last five years all had veteran DBs in the secondary. The defensive units that pulled off that feat include:

For fans of each team you’ll recognize that the units that were good were the ones that had pretty experienced and solid play in the secondary. I think a big factor in Oklahoma being spectacularly bad on defense in 2017 was that in the Mike Stoops era they’ve tended to be built heavily on the play of a single lockdown corner and Jordan Thomas proved incapable of checking the top WRs in the Big 12 by his lonesome and then was injured.

TCU’s defenses in particular have really struggled when they didn’t have multiple veterans in the backfield who’d spend a few years soaking up Gary Patterson’s vast knowledge of Big 12 offense and how to stop it.

It’s been really common in B12 history for a defense without a lot of known stars to jump out and surprise people if they’ve been loaded with RS seniors at multiple spots in the secondary. Here’s a glimpse into the experience levels of the 2018 secondaries (from what I can tell of my notes and spring practice reports): 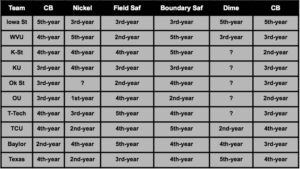 Now, some of this is certainly wrong because spring ball isn’t even over for a lot of these teams and I’m guessing at the depth charts. Still, it paints at least a decent picture of the XP level for various B12 teams. Here are the obvious takeaways:

-Despite losing Holton Hill (CB) and DeShon Elliott (S) to the NFL, along with Jason Hall (D), Texas is loaded with veterans in the secondary that have played a lot of football. Amongst those veterans are former blue-chippers Kris Boyd (CB), Brandon Jones (FS), Davante Davis (CB), and John Bonney (D).

-Oklahoma is in a tough spot trying to rebound on defense given the shape of their secondary. Brendan Radley-Hiles, whom I will be referring to as “Boo Radley,” is turning heads and spring and likely to own the nickel position. That’s great for OU and by all accounts he’s well beyond his years as a player, but he’s still a freshman in a super complicated position. My guess is that he’ll give and take with the playmaking generally overriding the mistakes. They’re also looking at playing a young pair of corners (albeit somewhat experienced) with Tre Norwood and Parnell Motley and at safety they’re hoping Kahlil Haughton plays like a vet and that Robert Barnes or Chanse Sylvie is good next to him. What you don’t see in the OU secondary is the guarantee of a lockdown corner they can build around like they did so well with Aaron Colvin or well at times and poorly at others with Jordan Thomas.

-Iowa State is probably fine despite losing all three starting safeties from a year ago. Their back-ups played well in the bowl game and are older players and likely starting FS Greg Eisworth, while a JUCO transfer, is a dude that is in his third college program. Their CB play is good and Eisworth projects as a worthy clean-up hitter in their robber schemes.

-TCU is in a somewhat precarious position after losing Ranthony Texada and Nick Orr from the starting lineup. For this projection I put Innis Gaines at nickel (SS in their parlance) and Ridwan Issahaku at FS (WS for them) but it’s hard to know how things will shake out. They like a lot of their talented young guys like Gaines and Lakendrick Van Zandt and I liked those guys out of high school as well but again, the best TCU Ds are the ones with lots of guys that have sponged up Patterson’s knowledge. There’s also the question of whether they have any studs at corner they trust on an island, or at safety to cover up the deep field.

-I like what OSU is doing scheme wise and am intrigued to see Kenneth Edison-Macgruder at boundary safety and Thabo Mwaniki at field safety (or nickel, it’s not clear to me which spot he’s practicing at) but overall they’re pretty young AND in year one of a new scheme.

-If West Virginia finds a good CB on their roster (perhaps JUCO Keith Washington) they look like they could make a comeback. They’re really young at field safety but talented (Kenny Robinson) and then have 5th-year players Dravon Askew-Henry and Toyous Avery to hold down the other two safety spots.

-Kansas State is one of the more curious and intriguing teams on here. CB Duke Shelley is a good one, I’m guessing RS sophomore A.J. Parker probably holds down the other CB position but they need to find a nickel. Senior Eli Walker is a big hitter and great athlete who they played as much as they could last year but he’s not really picking things up that fast, ideally he’d play nickel. Safeties Kendall Adams (BS) and Denzel Goolsby (FS) are both really solid and have played a lot of football in this defense. They may simplify things by moving Goolsby to nickel so Eli Walker can play the field safety position, I dunno. If they have to play Parker at nickel then that probably leaves Johnny Durham at starting corner opposite Shelley…it’d be fun to see if anyone wrote a “so…K-State has a white dude playing CB” article or whether announcers could resist commenting on it.

Everyone needs to braced for the narrative that this is Texas’ year to finally be “back.” We all know it’s coming and we all know that eventually Texas will indeed be back. I’ve picked the Longhorns pretty far down the list over the last several years, especially in comparison to other Texas writers, but this is looking like the year where they finally break through if only because the Big 12 is so wide open.