(I’m reposting and updating this article from its original placement).

While writing up a post recently about Kavontae Turpin and the role he’ll play in the TCU offense in 2016, I decided to track the Big 12’s history of fantastically productive little guys.

There have been so many, that it seemed about time that we made up a trophy to recognize them all. With a hat tip to my pal @drryanpepper who came up with the name, I present to you the “Darren Sproles water bug trophy for most outstanding tiny person.”

To be eligible for the award a player needs to play offense, fit the size requirements*, and be an absolute terror in space.

I present to you, the most outstanding tiny persons of the Big 12 dating back to the year 2000. 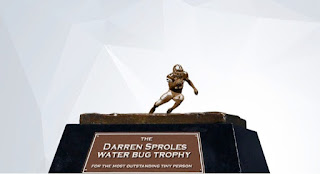 Hodges had the unenviable task of replacing Ricky Williams at Texas but he did admirably well with consecutive 1500 yard seasons, including this one which makes him our first recognized “most outstanding tiny person.”

Quentin Griffin was Darren Sproles before Darren Sproles was in school yet. There can be little doubt that Oklahoma’s Air Raid attack in 2000 and championship season was largely enabled by Griffin’s ability to be a worthy back but also a dynamic weapon in the passing game.

Griffin helped the Oklahoma machine keep going sans Josh Heupel but didn’t have as many opportunities as a part of a weaker offense. However, he also didn’t have to compete with Hodges Mitchell.

Way back in 2001 it wasn’t yet common knowledge that Mike Leach had brought a system to Texas Tech that was going to make monsters out of every crafty, hard working offensive player that he brought to Lubbock. It also wasn’t yet common knowledge that Wes Welker would transcend beyond the system and be one of the greatest slot receivers of his time in both college and the NFL. Welker’s 2001 season was his first good one, but Tech was still relying heavily on this scat back who had 142 rushing attempts AND 92 receptions.

It’s remarkable that this little guy saved his best year for his senior season when he’d already endured several seasons of pounding. Getting 322 touches is crazy but when a guy is averaging 6.7 per play you keep giving him the ball.

Year one for the namesake, but Sproles wasn’t quite ready to seize the honors with Quentin Griffin playing like this. Considering that Wes Welker put up his first 1k yard season this was THE YEAR of the tiny person in the Big 12. Any one of the three would have won the award going away in most other years.

Quentin Griffin moved on to the NFL and it was down to Sproles vs Welker…there was no denying the namesake. With Quentin Griffin gone there was also no tiny person around to protect Oklahoma from the 35-7 thrashing that Sproles and co. administered to the Sooners in the Big 12 championship game. This was his finest season at K-State.

Wes Welker had a phenomenal three-year stretch but just couldn’t break through and win the distinction as the pre-eminent little man with Quentin Griffin and/or the trophy’s namesake always around. However, he did help create the potential for breakthrough for future tiny persons at WR.

Sproles’ numbers slipped a bit and he had to play off Dylan Meier and serve as the main punch of the Wildcat attack with Ell Roberson gone. He was up for it.

Another explosive little guy who thrived taking the pitch in an option offense, this time at Nebraska, Cory Ross came on the scene strong in 2004 and set himself up to take over for the future.

Ross narrowly took advantage of the namesake finally moving on to the NFL and held off a tiny challenger despite a slip in production.

2005 was the year of 6’5″ super-freak Vince Young, there were no little men around to deny him from getting all the attention.

The mid to late 00s in the Big 12 were filled with scat back sized RBs that rarely dominated games but were always a threat to take advantage of the increasing amounts of space that spread systems would put them in.

Savage initiated a nearly-uninterrupted run of five years in which Oklahoma State put little guys on the field at RB where they did serious damage running behind very good Joe Wickline offensive lines.

Savage took over the full load of the Oklahoma State offense in 2007 and did quality work with his quick bursts.

Tony Temple had another solid season but 1/5 of his yardage came in their bowl game and it seemed more fitting to reward Eric Morris and the Texas Tech tradition that will prove to have a strong presence on this list.

Morris wasn’t utterly horrifying unless it was 4th and 3, your defense was gassed, and you knew that another Texas Tech 1st down was going to be the end of your DL’s legs. In that scenario, he was pretty scary.

Hunter picked up where Dantrell Savage left off and did serious damage in 2008, which was probably one of the strongest offensive years the Big 12 has ever seen. The Cowboys had a devastating attack triggered by Zac Robinson with Russell Okung and Brandon Pettigrew mauling the edges at LT and TE and Dez Bryant running routes downfield.

Cosby’s listed size at Texas made him borderline but in reality he was probably just within the parameters. In 2008 he was actually the no. 1 target at Texas (Shipley wouldn’t take that mantle until 2009 although he was also brilliant in 2008) in one of the all-time greatest quick passing attacks that has ever existed. Again, 2008 was nuts. You also had an insanely loaded Oklahoma offense and a Tech offense that nearly put five guys at or over 1k yards from the line of scrimmage (Michael Crabtree 1166, Baron Batch 1207, Shannon Woods 1113, Detron Lewis 913, Eric Morris 805).

2009 was a down year for little men because Quan Cosby graduated and Kendall Hunter sat the year out with an injury. Stewart filled the vacuum with a solid year on a pretty weak Buffalo team.

Robinson’s 2009 season was an early positive mark on the resume of modern day spread guru Tom Herman, who was the OC at Iowa State at this time. Playing with Austen Arnaud, Robinson was able to do a reasonable amount of damage.

Hunter was back from injury in 2010 and tearing through defenses again as a part of the Holgo-Raid Cowboy offense that changed the league by helping to reintroduce play-action passing, now from spread sets. He was lethal this year in their innovative diamond and spread-I sets though certainly helped by the Weeden to Blackmon and Weeden to Cooper connections that created space for him to run.

Stewart put in an impressive year as the workhorse for a poor Colorado team, any time a guy that’s only 175 pounds touches the ball 319 times from the line of scrimmage you have to tip your hat.

Tevin Reese took over the water bug trophy with his breakout 2011 as part of one of the most all-time explosive Big 12 offenses in history.

This was year one of Hubert’s remarkably steady run at K-State. Back in 2011 he was pretty nasty catching option pitches on the perimeter from Collin Klein but obviously he didn’t get too many TDs thank to Optimus taking on the role as power back.

The one year when Tavon Austin was eligible for this award, this is one of the all-time great water bug seasons in Big 12 history. Tavon Austin left ruin in his tiny wake.

Tevin Reese fell short of reclaiming the award with Tavon Austin introduced to the league. Hubert had another season much like his 2011 (and his 2013) but missed out thanks to the presence of these two mini-titans.

Hubert had three consecutive seasons that were all about the same but in 2013 we have to finally give him his due.

This was year one of the Jakeem Grant experience, where he quickly asserted himself as the most terrifying water bug in the Big 12 despite not yet playing as large a role in the Tech offense as he later would.

With Hubert moving on and Grant slowly evolving his game beyond “constraint in Kingsbury’s Air Raid,” Jakeem assumed control. Interestingly, Grant is the only Tech player to actually win the award though many Raiders appear all over the list.

Hill always gave the greater appearance of danger then actual production. Despite getting 133 touches from the line of scrimmage he only reached the end zone twice. He was good, to be sure, but he had as many runs go nowhere as he did explosive plays for the Cowboys. Then he committed a heinous crime off the field and that was it for his shot at the illustrious prize.

Grant finished up a strong run as the league’s most lethal water bug with a brilliant senior campaign. The torch must now be passed.

Turpin was well set up as the heir apparent to Grant and may even prove to be the finest tiny guy the league has produced.

It looked like Kavontae Turpin would put this award on lockdown for a year or so but injuries kept him out of the TCU lineup. Meanwhile McCleskey exploded at OSU working with Mason Rudolph, opposite James Washington, and with a resurgent Cowboy run game.

He was fantastic in 2016 and probably could have been the no. 1 option for a good team had he not been playing with Washington.

Steven Sims had a really strong 2016 season and fellow water-bug LaQuvionte Gonzalez almost matched him, but Sims was the main guy in the Jayhawk passing game. You could make a case for him over McCleskey given the numbers and the circumstance but Sims’ production came in games that mattered less and with less focus and attention from the opponents so I couldn’t give it to him.

Dominique Heath of K-State (438 yards) and Kavontae Turpin were also still knocking on the door as runner-ups. All of them return to make a run at the reward in 2017.

So, who was the greatest? What was the best season by a “Darren Sproles water bug trophy for most outstanding tiny person” recipient? Who’s got next?