I learned a few things watching Ohio State live against Indiana. It’d be worth rewatching the game to study their passing game more but I feel pretty confident with this initial assessment.

Here are a few scattered thoughts I had about the Buckeyes in terms of how they match up to the Sooners. 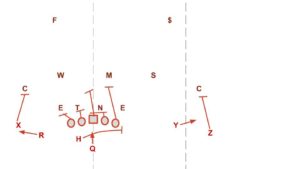 There just aren’t any great ways to handle this play. Barrett knows how to read the play so as to attack behind the double team or the trap block by the H based on how the linebackers try to fill the play. It’s hard enough to stop split zone when it’s the RB getting the ball but when it’s the QB it’s nearly impossible unless you’re winning key blocks up front.

I guess OU’s best bet is to start with somewhat wide LBs and then crash them in hard while leaving the defense of the bubble screens to the CBs and Ss. Barrett can’t read for run or pass as decisively AFTER the snap so you want to muddy the waters and get him to do what you want. Another idea would be to just load the box and dare them to beat you with the bubble screens. Spinning to single-high can’t save you because an OLB will still be put in conflict by the bubble. It’d have to come after the snap when you’re confident Barrett wouldn’t throw it.

Overall I still don’t at all like this matchup for the Sooners. Add in the fact that this game is taking place in Columbus at primetime and you’ll have a fired up Buckeye team that already knows they can handle some adversity after their tough opener against a conference opponent.