If you haven’t heard from fans of other conferences, the Big 12 hasn’t been doing so well in the NFL draft of late. This was a big story in 2017 when only one player (Pat Mahomes, Texas Tech) was drafted from the conference into the first round. I figured that the league would rebound strongly in 2018 because there were so many big time players coming back.

Sure enough, the Big 12 had the no. 1 overall pick (ironically the guy that every B12 team passed on in recruiting) and boosted their overall representation. But it still wasn’t a very impressive performance:

It’s hard to deny the argument that the Big 12 is starting to carve out a new tier in the college football world of leagues between the Power 5 and the Group of 5 conferences. You could argue that the Big 10 is close to that as well except that the Big 10 has four more members and their expansion additions were either fledgling football programs located in prime markets (Rutgers, Maryland) or a dormant power (Nebraska). The former two need time to build up their programs and the latter is fighting to get back and probably will succeed. If either Oklahoma or Texas left, the Big 12 would basically be a G5 conference and the other would likely bail as well.

Now the smaller size of the Big 12 explains SOME of the lower number of picks but as you can see from the “draft picks per team” column, the Big 12 still lags well behind.

Here are a few stabs at trying to understand what’s going on here and why the Big 12 is faring so poorly at putting players in the NFL.

At Football Study Hall, Redmond Longhorn did a fascinating post on how many blue chippers different states produce compared to how many NFL players they produce.

There are five states in the Big 12 (Texas, Oklahoma, Kansas, West Virginia, and Iowa) but the majority of the talent comes from the state of Texas which holds the largest share of the population. Redmond Longhorn found that the state of Texas was overrated a tad in that it produced fewer NFL picks than the high number of blue-chippers would have suggested. So is the Big 12 just recruiting overrated Texans?

But that doesn’t hold up as an explanation for a large number of reasons. One is that much of the South, as well as Florida, as scored as being “overrated.” The best conclusion I could draw was that these states score as overrated because they produce more players than other states, consequently get more scouting and attention, and then consequently get overrated.

So Texas may not produce quite as good a player as the recruiting rankings would suggest, but the same truth should also be holding the SEC and ACC back and it clearly isn’t, so that can’t be what’s going on here.

Obviously the Big 12 is much more of a spread league than the rest of nation. In fact, it was at a point earlier in the decade where Manny Diaz quipped that this league plays “a different sport.” Nowadays the spread is, uh, spreading to the other conferences as well.

Urban Meyer brought his brand of spread football to Ohio State and immediately started to dominate the league before his team was even postseason eligible or properly rebuilt. Penn State hired a top FCS spread coach two years back and absolutely surged as a program. Now Nebraska has hired another top young spread mind (Scott Frost) and figure to soon surge as well.

The SEC was converted to the spread by Florida’s success which was then followed up by the fact that the schools which gave Alabama the most trouble were Ole Miss, Auburn, and Texas A&M. Then Alabama went spread and now it’s pretty common for teams across the league to at least dabble in the philosophy.

The Big 12 is still fairly unique and a little ahead of the curve in terms of exploring the full range of possibilities offered by tempo, RPOs, and using downfield passing to set up the run.

Meanwhile the NFL is regularly frustrated by the kinds of OL that spread teams produce but they also are all about QBs that can read defenses and throw the ball all over the field, as well as the kinds of targets and defenders that thrive in this style of play. The most passing-oriented college conference shouldn’t really be at a disadvantage in terms of producing prospects for the passing-oriented professional ranks.

The Big 12 doesn’t recruit at the same level as most of the rest of the P5 conferences, at least not consistently from team to team. Part of that is likely due to the lack of talent within the states that make up the conference.

I touched on this in an article examining market inefficiencies in Big 12 recruiting, the league has a rather small population in comparison to the others and over 70% of it is located in the state of Texas. Additionally, there are far more African-Americans in the other leagues and since their population tends to produce more D1 football players than others (save for Islanders, on a per capita basis at least) they tend to produce more talent overall.

That’s not the only issue, another issue is the Big 12’s lack of exclusive access to Texas talent. Check out where 247’s top 50 players in the state of Texas have gone over the last five years: 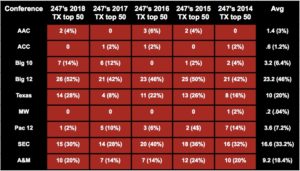 Consider that there are four Big 12 programs within the state of Texas in UT, TCU, Texas Tech, and Baylor that all rely pretty heavily on recruiting the state. Additionally, everyone else in the league also draws heavily from Texas. Oklahoma and Oklahoma State in particular need Texas players to fill out their classes because their own state is too small.

Meanwhile the SEC is regularly poaching some of the top players in the state, as are the B1G schools (especially Ohio State) and the Pac-12 (mostly Stanford, occasionally UCLA or USC) regularly robs talent as well. If you take out the two flagship Texas schools for their respective conferences (Texas and A&M) you have the Big 12 recruiting 12.2 of the state’s top 50 every year (24.4%) and then the SEC recruiting 7.4 (14.8%).

While Arkansas and LSU have always liked to dip into Texas for players, that’s a pretty bad number for the Big 12. Greater proximity to Houston, East Texas, and DFW doesn’t really mean much for the non-OU or Texas B12 schools (and sometimes not for them either) when they go up against Alabama, Ohio State, LSU, or other blue bloods that like to poach Texas.

So, if the Big 12 has a limited talent pool and then regularly miss out on the top rated talents from within it, then how are they going to produce NFL prospects at a comparable rate to leagues like the SEC?

Texas is screwing it up!

Another explanation that may have some power is that Texas is making the rest of the league look bad and that maybe Oklahoma is doing so as well. Texas pretty much gets the first pick of best players in the state every year with occasional defeats to OU or whichever of Baylor or TCU is strongest in that cycle so how are they doing in producing draft picks? 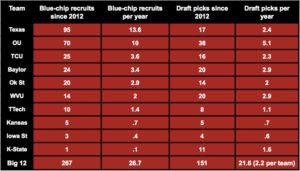 These numbers suggest some obvious takeaways.

One is that the difference between a 3-star and a 4-star recruit is overrated. There’s a correlation between blue chippers recruited and players that end up in the NFL but it’s pretty far from 1.0. The other teams in this conference are much closer to Texas and Oklahoma than the blue chip ratios suggest they should be, especially K-State. Some of that is probably explained by the Midwest being underrated but another factor has to be that the difference between blue chippers and non-blue chippers is more marginal than we’ve been led to believe.

The Big 12 averages 26.7 blue chip recruits every year and 21.6 draft selections, since 36% of those blue chips went to Texas but only 17 Longhorns have been drafted, it’s pretty clear that the league’s draft picks are not coming from the 4-star ranks.

Another big takeaway is that yeah, Texas is definitely making the Big 12 look worse by hoarding it’s top rated talents (and TV markets) and then underachieving every year. Oklahoma is not out-performing the rest of the league to the extent that their recruiting advantage might lead you to believe but they’re at least getting close. Texas is nowhere near where their recruiting suggests they should be.

There’s lots of reasons for this that I’ve explored at Inside Texas and elsewhere for years and years but there’s little doubt that the Longhorns have let the league down in terms of perception and branding. Everything that TCU, Oklahoma State, or Baylor achieves looks much better if it’s coming against a Texas team that’s making the most of its resources and pounding out of conference teams. Oklahoma has enough tradition that they do just fine even if beating Texas isn’t a big mark on the resume, although I believe that Oklahoma only approaches their ceiling as a program if Texas is good enough to force it from them.

The Big 12 has some major issues in an increasingly market-driven college football world. They lack talent across the league save for at Oklahoma and Texas and one of those schools has spectacularly failed to make much of their talent.